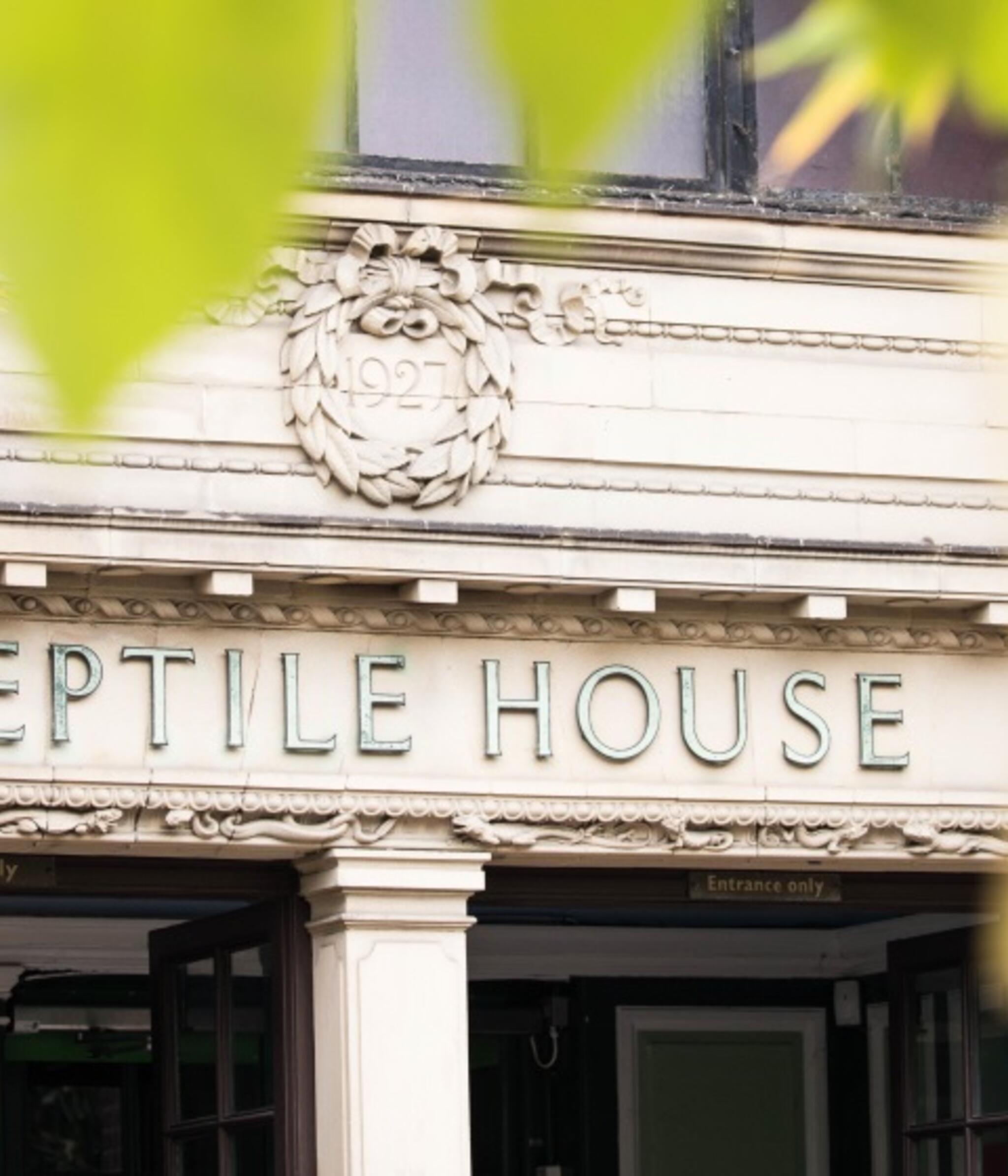 Built in 1926, our Reptile House has been advancing understanding of the natural world for nearly one-hundred years. Today we are working with species under threat from extinction from around the world, from Philippine crocodiles and Chinese Giant salamanders, we have something for every reptile and amphibian lover.

Animals at the Reptile House

The new and improved amphibian exhibit focuses on the evolution of amphibians; their astounding diversity and adaptability; the threats they face in the wild; and how we are working to conserve them.

From salamanders to worm-like caecilians, fascinating newts and charismatic tree frogs, the new Amphibian Wing shows how varied amphibians can be.

The Conservation In Action Lab allows visitors to engage with zookeepers and scientists who are conducting research for Mallorcan midwife toads, Sardinian brook salamanders and Lake Oku frogs to investigate the effects of the deadly chytridiomycosis, a fungal pathogen which is driving amphibian population declines around the world. This research is imperative to developing techniques and treatments for use in the field to help save wild populations of amphibians from the imminent risk of extinction

The Secret Life of Reptiles and Amphibians

Representing some of the world’s most astonishing diversity, residents in the new purpose-built space at London Zoo will include the world’s largest amphibian and largest aquatic frog!

Delve into the secretive habits of these remarkable animals as they blend expertly into their environments – hidden in leaves and branches or just beneath the water’s surface. See through the eyes of a scientist as you learn about the surprising ways reptiles and amphibians survive and reproduce in their unusual habitats. Look through X-Rays in the lab, record scientific observations and even learn how to swab a frog to detect diseases.

Follow in the footsteps of conservationists and venture into the field. Keep your eyes peeled and your ears open as you listen for the weird and wonderful sounds frogs use to communicate, spot animals among the branches and hop into a canoe to meet a Philippine crocodile. Find out about the exciting – and crucial –conservation work happening around the world to save reptiles and amphibians on the brink of extinction.

The Secret Life of Reptiles and Amphibians is currently under construction in Barclay Court in the centre of London Zoo. Keep an eye on this page to stay tuned to stay up to date and be the first to hear when we’re opening. Our salamanders, lizards and snakes will be expecting you!

The Reptile House you can visit at the Zoo today was built in 1926. It was erected on the site of the Ape House, and two other Reptile Houses had existed previously, the first erected in 1849 (before London Zoo had even opened to the public) and the second in 1882.

The building itself was designed by Dr Joan Beauchamp Procter, Curator of Reptiles, with the architect Sir Edward Guy Dawber. The reptile sculptures at the entrance to the building are by the sculpture George Alexander. At the time, the building was hailed as one of the most sophisticated building of its type in the world.

Among other key features, the Reptile House has differentiated heating to provide "hot spots" for the reptiles and "aquarium principle" lighting which means the visitors walk around in relative darkness and lighting highlights the animals in their environments.

A famous scene from Harry Potter and the Philosopher's Stone was filmed in the Reptile House in November 2001. In the scene, a Burmese python speaks to Harry Potter, played by Daniel Radcliffe for the first time. In fact, the enclosure filmed is actually home to our black mamba.