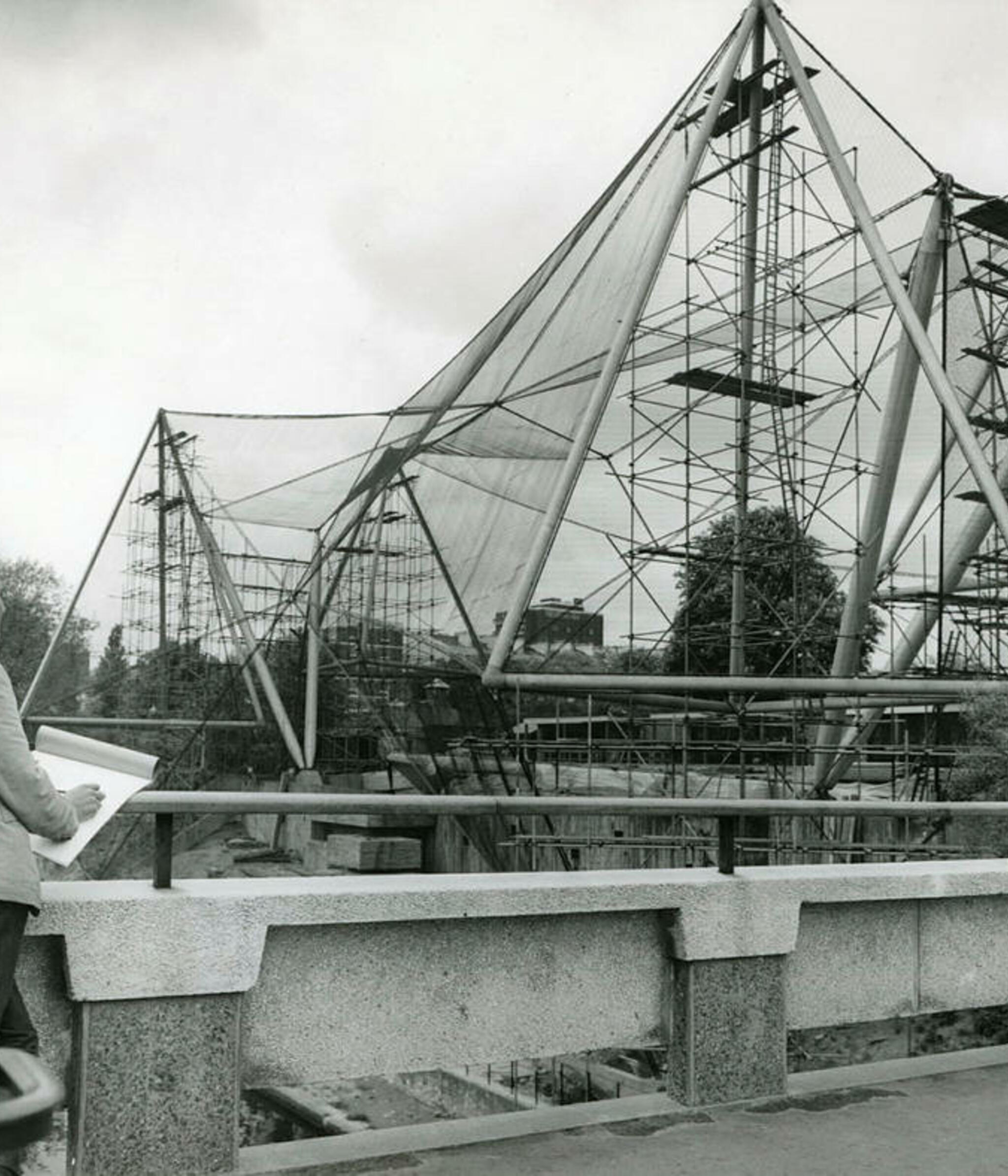 Britain’s first walk-through aviary was a bold and innovative piece of London architectural design – which has been lovingly revitalised as Monkey Valley.

Designed in 1960-61, developed between 1962 and 1964, and officially opened to the public in 1965, the Snowdon Aviary was a pioneering project that made London architectural history and would inspire future generations of architects. The idea of building an aviary on the banks of the Regent’s Canal originated in the ambitious plans for a “New Zoo” drawn up by consultant architect Sir Hugh Casson at the end of the 1950s.

Adventurousness and future adaptability were central to the plans, which aimed to “transform the Zoological Gardens so as to make them an outstanding feature of London’s architecture and landscape, and at the same time provide our collection of wild animals, the most varied and one of the largest in the world, with housing best suited to its diverse physical and psychological needs.”

To design the new London Zoo aviary, ZSL enlisted the help of former architecture student turned society photographer Antony Armstrong-Jones (the late 1st Earl of Snowdon), who was the talk of the town on his marriage to Princess Margaret in 1960. The new Earl may have been recommended for the project by his then brother-in-law and ZSL president at the time, The Duke of Edinburgh, after Snowdon designed an aviary for Mereworth Castle.

Snowdon worked with architect Cedric Price and structural engineer Frank Newby to develop the soaring steel and aluminium design, said to be inspired by the flight patterns of birds. Although the project was originally dubbed the Northern Aviary, the Snowdon name stuck.

Ahead of its time in a number of ways, the aviary drew on Frank Newby’s experience of working on another apparently gravity-defying landmark: the Skylon structure at the Festival of Britain in 1951. Like Skylon, the aviary harnesses tension to support its structure, with a web of steel cables held in constant tension over an aluminium framework, all covered with lightweight aluminium mesh.

Rising to 24m high in places, the roof framework is shaped around four triangle-sided pyramids (tetrahedrons); two at each end of the building. The aviary was the first tension building in the UK that was designed to be permanent, and one of the earliest to use aluminium (then a relatively new-fangled material) so extensively. Equally innovative at the time was the use of computer modelling to handle some of the engineering calculations involved.

Designed to enclose as much open space as possible for birds and people to share, the Snowdon Aviary also needed to make the most of its tricky location on the steep slope between Regent’s Canal and Prince Albert Road. It included an artificial cliff intended to provide roosting and nesting places for birds and plenty of viewing opportunities for visitors, along with trees, pools and waterfalls and a zigzagging walkway.

Initially home to around 150 birds, the aviary has provided a home to a wide variety of species over the years. These ranged from laughing thrushes and glossy starlings to water birds such as spoonbills and ducks, ground-dwelling cranes and plovers, and cliff specialists such as kittiwakes and alpine choughs.

The Grade II* listed former aviary is enjoying a fresh lease of life from summer 2022 as Monkey Valley, a new home for ZSL’s eastern black-and-white colobus monkeys. The redevelopment was made possible by a £4 million grant from the National Lottery Heritage Fund.

The reimagined Monkey Valley continues the original designers’ dream of providing a stimulating, naturalistic habitat for its resident animals. Visitors will be able to take a tree-top walk while monkeys leap from branch to branch of their landscaped home. But if you’re missing bird life, head over to our modern walk-through aviary at the Blackburn Pavilion to discover some of our current bird collections.

Journey through our history