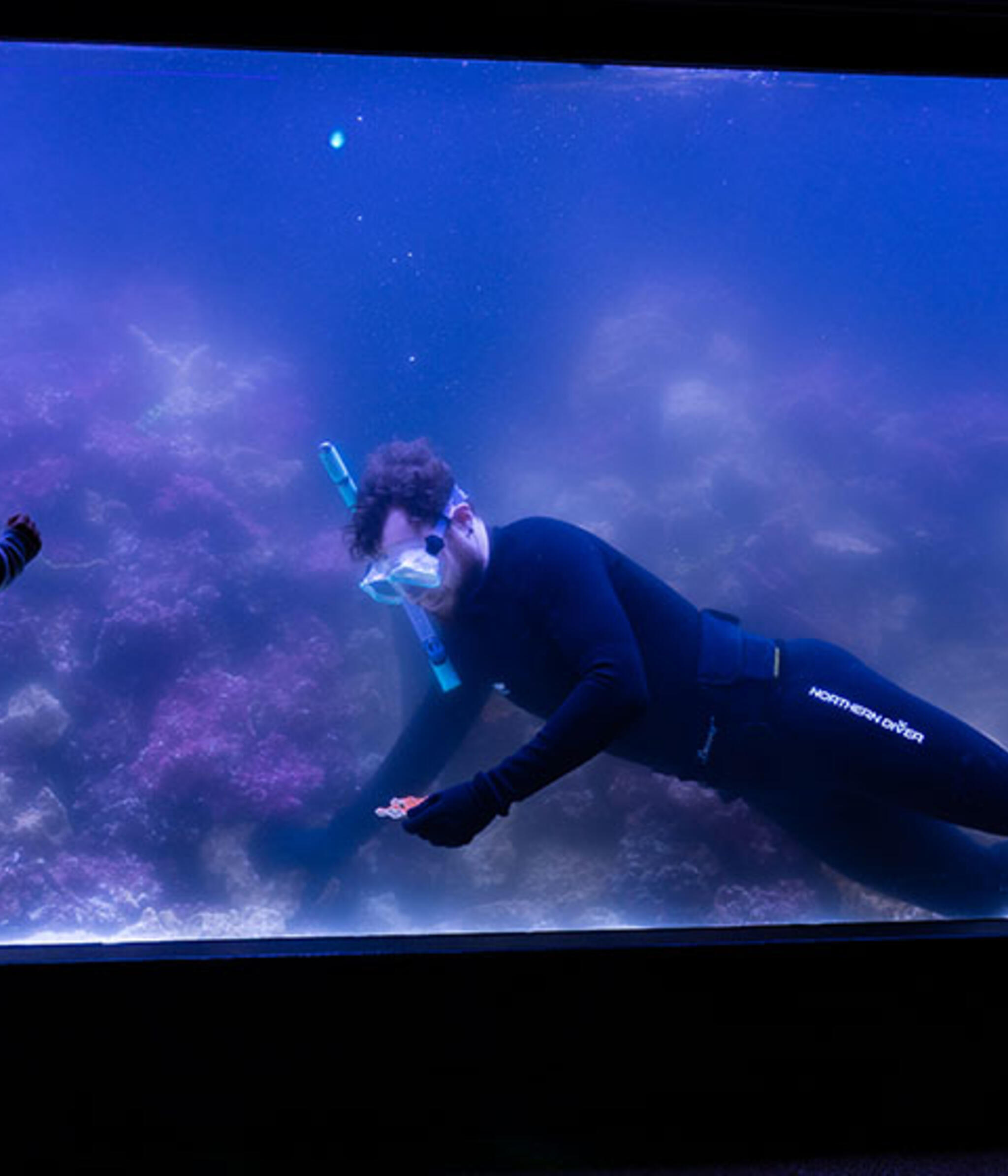 From minibeasts to coral reefs

Enter the world of Tiny Giants , and journey through the habitats of the planet’s smallest but mightiest animals.

Shining a spotlight on the planet’s smallest superheroes: from underwater corals and the aquatic wildlife they support, to industrious leafcutter ants, spiders and beetles – we're celebrating the species we quite literally couldn’t live without.

Visitors will be given a bugs-eye view of the world, as they find themselves shrunk to the size of an ant, surrounded by a garden of giant leaves and flowers, to meet over 160 species of marine, freshwater and terrestrial invertebrates.

See through the eyes of a bug - from multi-lensed bees and HD vision jumping spiders to the psychedelic sight of a mantis shrimp - before trying to spot miniature masters of camouflage and meeting the multi-talented aquatic animals who clean our oceans, seas and rivers.

Take a break beneath the watery lights of a seven-metre-long reef aquarium, where visitors can watch schools of reef fish, including clownfish and blue tangs - known to many as Nemo and Dory - swim through a forest of corals rescued from the illegal wildlife trade by London Zoo’s experts. Step away and be mesmerised by the gentle movement of moon jellyfish, floating next door in all their translucent glory.

Discover an alternate world, where insects no longer exist, to explore just how different our daily lives would be without these largely unseen animals – spineless superheroes who do everything from cleaning the environment and revitalising soil to pollinating a third of the supermarket staples we buy every day.

In with the spiders

Explore the UK’s only spider walkthrough - where nothing stands between visitors and golden orb spiders and Madagascar weavers in their beautiful webs - plus discover other amazing arachnids and their incredible skills.

We've taken on the challenge of a lifetime in a bid to clear the name of one of the world’s most feared, misunderstood and maligned creatures, in a unique and immersive exhibit.

Come face-to-face with amazing arachnids from around the world in a completely unique and immersive experience within the Zoo’s new Tiny Giants exhibit.

Get gently acquainted with UK native species and regular house guest, the ‘spider in a bathtub’, before meeting fascinating exotic species such as the black widow, huntsman and giant bird-eating spiders.

Then discover the true meaning of ‘up close’ as you enter the forest home of our uniquely sociable communal spiders, golden orb spiders that spend their days posing proudly on huge one-metre wide webs.

You’ll also have an opportunity to take home a special souvenir from the walk-through expedition as you pose for a pic with the golden orb spiders in front of the “Spider Selfie” mirror.

A sneak peek into the Spider Nursery offers an insight into the breeding work carried out by keepers at the Zoo, and hopefully a glimpse of tiny spiderlings.

In with the Spiders is home to one of the UK’s most endangered animals, the fen raft spider.  One of the biggest spiders in Britain, they have the remarkable ability to walk on water. As part of the Zoo’s worldwide conservation work, our zookeepers worked with Natural England to rear tiny fen raft spiderlings into adults, which were then reintroduced back to the wild.

Celebrating creatures whose very name has been slandered over the years, In with the Spiders’ ‘talking tarantula’ dispels some of the myths surrounding spiders to reveal why they are in fact friend, not foe.

And for those visitors not yet convinced by how amazing they are, there’s the hugely successful arachnophobia-curing Friendly Spider Programme – running now for more than two decades converting spider-haters into spider-lovers. Visitors are sure to leave the exhibit with a new-found appreciation for arachnids.

Find out how spiders are more likely to save your life, than do you harm!

Visit the Zoo’s Partula Lab, where Critically Endangered tree snails are being reared as part of a vital breeding and reintroduction programme to save the species from extinction. Snails bred at London Zoo are released on the islands of French Polynesia - after invasive predators drove the species to extinction in the 1960s.

We also have the only ex situ population of Bermudian land snails outside of Bermuda. This species was almost lost forever because of an accidentally introduced predatory flatworm species and the predatory rosy wolf snail. To save this species, Bermuda’s Department of Conservation Services (BDCS) called on us to establish a secure breeding population and to advance understanding of the species. Our expertise have helped improve the success of the Bermudian snail recovery programme, as we developed care guidelines and clarified their life history. Through our work we have returned 200 snails to Bermuda, establishing an ex situ population at the Bermuda Zoo and Aquarium in preparation for reintroductions to the wild.