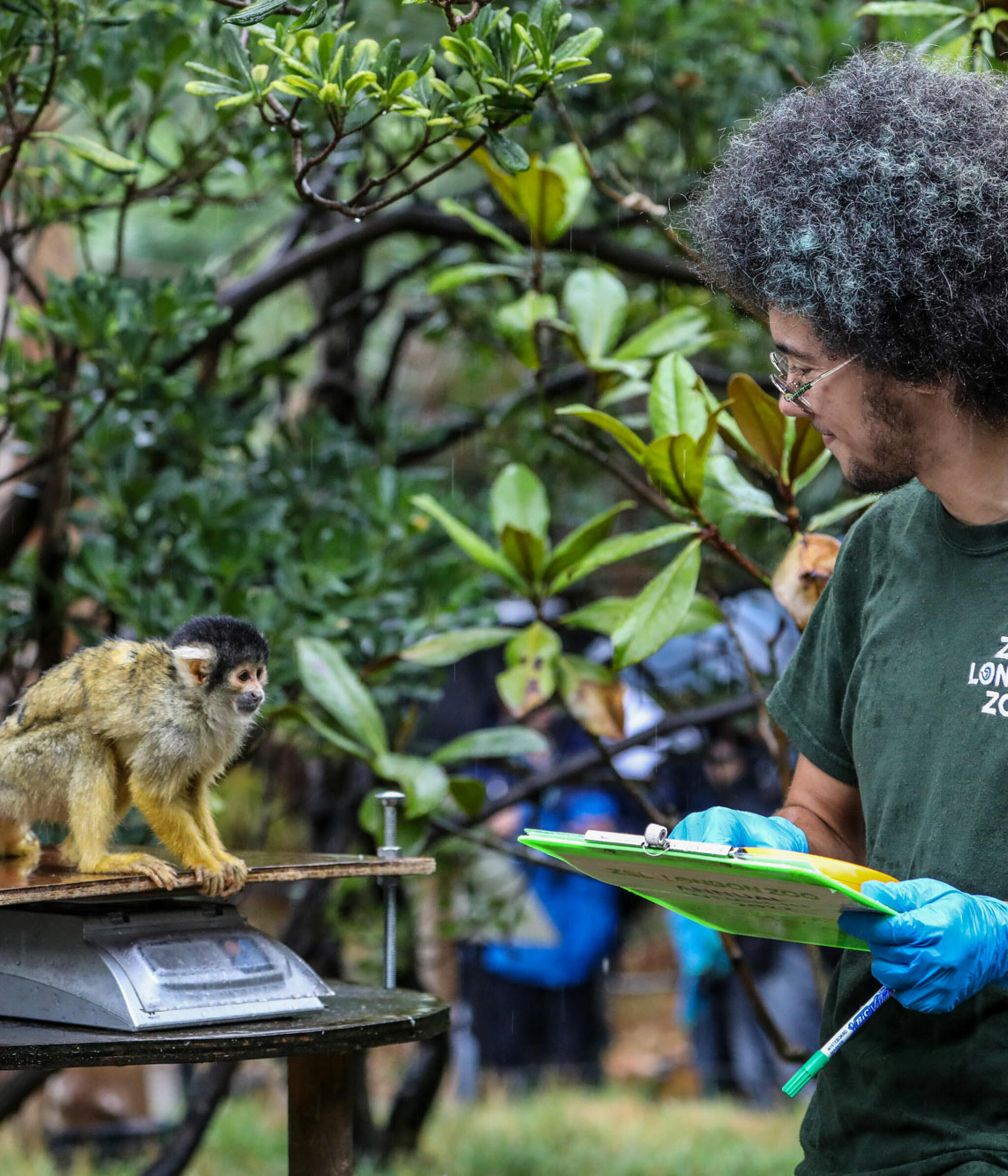 Penguins, squirrel monkeys and camels are just some of the animals who had their vital statistics recorded at ZSL London Zoo’s 2022 annual weigh-in today (Thursday 25 August).

Humboldt penguin chick Bobby, who hatched at the Zoo in April, took to the scales for his first weigh-in, while aquarist Colette Gibbings dove into the Tiny Giants aquarium to measure the growth of the Zoo’s Critically Endangered brain coral.

Zookeepers encourage animals onto the scales

Patient keepers encouraged the Zoo’s troop of Bolivian black-capped squirrel monkeys onto the scales one by one by offering up a few tasty treats, while domestic Bactrian camel Noemie - the heaviest animal at the Zoo - was coaxed onto her weigh-board by camel keeper Mick Tiley.

Elsewhere, Sumatran tigress Gaysha stretched out against a giant ruler, eight weeks after giving birth to three Critically Endangered tiger cubs; the only animals not being recorded in the annual event, the cubs will be weighed for the first time at their first health check, giving vets and keepers a great indication of how they’re doing - though keepers estimate they’ve already quadrupled in size since their June birth. 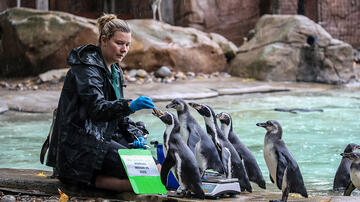 With more than 14,000 animals in their care, ZSL London Zoo’s keepers spend hours throughout the year recording the heights and weights of all the animals – vital information which helps them to monitor their health and wellbeing.

The annual weigh-in is an opportunity for keepers at ZSL London Zoo to make sure the information they’ve recorded is up-to-date and accurate, with each measurement then added to the Zoological Information Management System (ZIMS), a database shared with zoos all over the world that helps zookeepers to compare important information on thousands of endangered species. 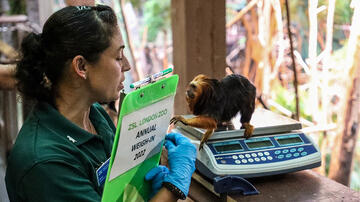 ZSL London Zoo’s Deputy Animal Manager, Daniel Simmonds said: “We record the vital statistics of every animal at the Zoo, from the tallest giraffe to the tiniest snail.

“This helps to ensure that every animal we care for is healthy, eating well, and growing at the rate they should, as weight is a key indicator of health and wellbeing - a growing waistline can also help us to detect and monitor pregnancies, which is important as many of the species at ZSL London Zoo are endangered and part of international conservation breeding programmes, including today’s Sumatran tigers and Vietnamese giant snails.

“Our newest arrivals, three Sumatran tiger cubs born at the Zoo in June, will be weighed next month at their first health check - which takes place at the age of three months.

“By sharing information with other zoos and conservationists worldwide, we can all use this knowledge to better care for the species we’re striving to protect.”

With different personalities to take into account, zookeepers have to use clever tactics to entice the animals to stand up and be measured; ’tricking’ penguins into walking over scales one by one as they line up for their morning feed and coaxing the Zoo’s troop of Eastern black and white colobus monkeys, - who have recently moved to their brand-new Monkey Valley home - onto the scales through fun training activities.