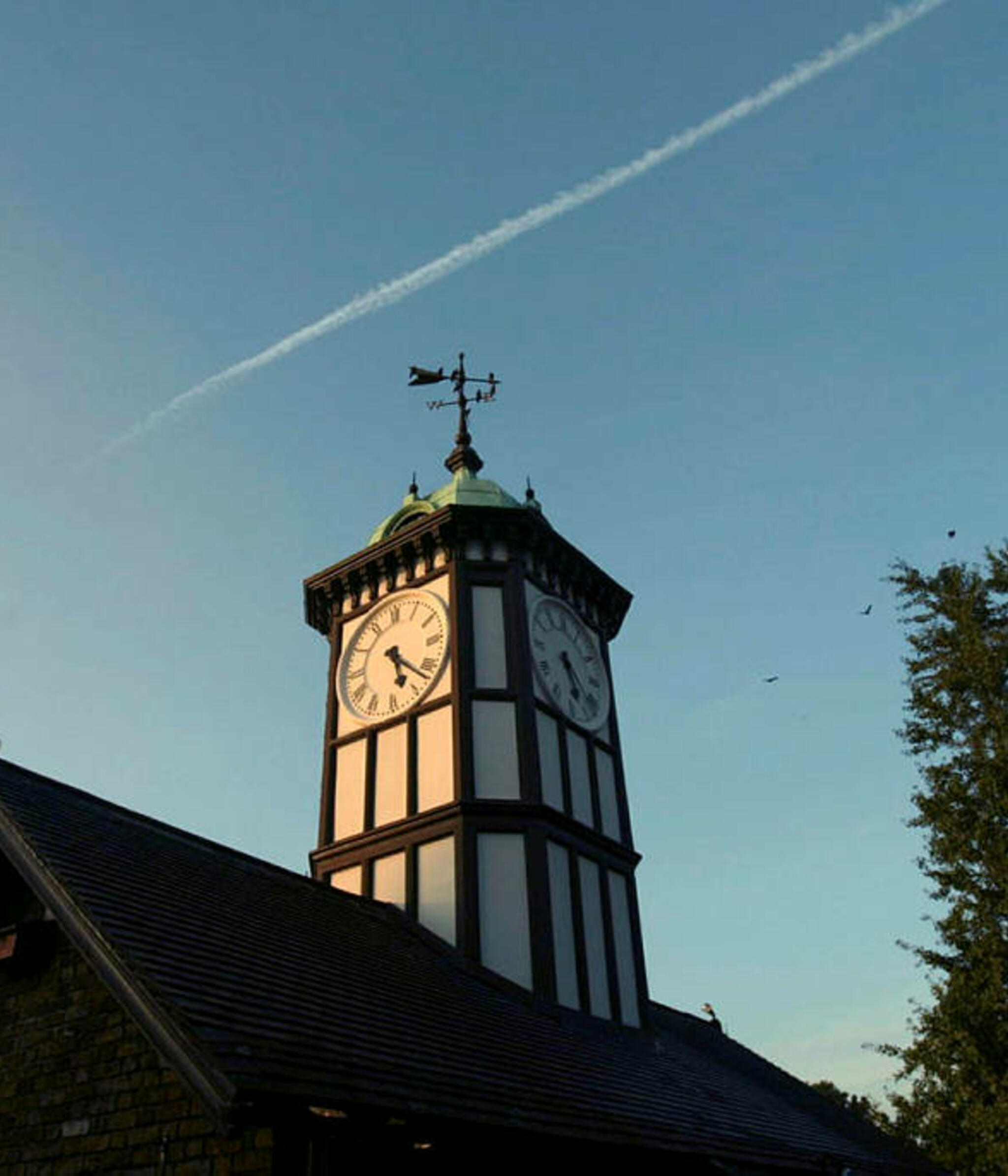 In 1826, Stamford Raffles together with Humphry Davy brought together a group of scientists, collectors, gentry and gentlemen and founded the Zoological Society of London. The purpose of the Society was to form a collection of animals and study them for the advancement of zoological knowledge. The Society obtained a lease on an area of Regent's Park in 1826 and appointed Decimus Burton, a young architect, to lay out the gardens and design accommodation for the animals.

From its beginnings it was an integral part of this area of London. Its architecture blends into Regent's Park and allows the public to see exotic creatures right in the centre of the city.

Over almost 200 years many leading architects have contributed to the built environment of London Zoo. It has developed with a wealth of architectural variety that illustrate trends and styles in architecture and methods of construction over that period. The collection of buildings has such architectural interest that it includes two Grade I and eleven Grade II listed structures and there is nowhere else in the UK that has so many listed structures of such diversity in such a small area. They represent two centuries of architectural history and demonstrate the challenge in designing to meet the needs and requirements of the natural world and man's interest and relationship with it.

The architecture also illustrates the history of animal husbandry. The known requirements for looking after animals properly has developed from a literal blank page in the early 19th century where animals were often being seen for the first time. Today, cooperation with research and information regarding best husbandry practice, from across the world, allows this knowledge to be incorporated in the design of each new enclosure.

Such a legacy of listed architecture within the Zoo means it has had to adapt. Some buildings are considered to be obsolete and unsuitable for their original function. The Zoo has amended some of the buildings to get the optimum use from the structures to best suit the requirements of the animals as we know them to be today.

The Zoo opened to the Fellows of the Zoological Society and their friends on 27th April 1828. The zoological gardens as they were then called, were a work-in-progress with construction work continuing through the early years. Some of the permanent structures were significant and still exist in the Zoo today.

This irregularly shaped artificial pond is the only landscaping to remain from the early gardens and was designed by Decimus Burton. The ponds have been remodeled on several occasions, the last as part of the Land of the Lions in 2016.

The islands are now planted with large willows and are populated by pelicans and flamingos.

A monument of our history

One of the oldest surviving features at the Zoo, this tunnel was was served as an air raid shelter for employees and local people during World War II.

When giraffes arrived at London Zoo in 1836, they caused a public sensation. Our giraffes were the first to be seen by the public in England, and made Londoners instantly form a connection with the natural world.

The Zoo developed through the 19th Century with extensive new construction. The buildings were generally of functional design, many of brick and typical of the period. The Zoo broke new ground through this period with some notable 'firsts' in world zoo history with the first ever Reptile House, Aquarium (originally an 'Aquaviverium') and Insect House.

The Lion House, Monkey House, Carnivore Terrace and Elephant and Rhino House were all significant structures with the Lion House staying in use for 100 years up until 1975. These buildings have been demolished to reflect changing requirements and only three buildings of note have survived.

Now known as the Birds of Prey Aviary. It was extensively reconstructed in 1989 in the same form as the original with a hooped tubular steel frame and strained 'invisible' wire to enclose the space. The original bird housing is still in use and remains visible at the back of the enclosure.

The original structure which originally provided 28 enclosures for large birds has been adapted and is now included within Tiger Territory, the African Aviary and the Galapagos Tortoise exhibits.

Blackburn Pavilion originally housed crocodiles, and is one of the only Victorian animal houses at the Zoo to remain in use today.

At the beginning of the 20th Century there was a new mood in Zoos around the world and with the appointment of Peter Chalmers-Mitchell as Secretary, ZSL was no exception. He was elected in 1903 and set the Zoo on a path for change. He sought the most modern thinking in Zoo design and from his appointment to his retirement in 1935 he challenged thinking about animal husbandry. He was also the prime influence behind the development of Whipsnade Zoo.

This building was built to facilitate a move from Hanover Square, to create better access to the Zoo and to accommodate a growing collection of books. The interior of the ZSL Library was extensively remodeled in 1965 by Franz Stengelhofen and Colin Wears.

Built over 100 years ago

At the time of their creation in 1913, they represented an innovative step to provide more naturalistic settings for animals at the Zoo. Over the years, the terraces have been home to goats, bears, penguins, ibex and snow leopards

We were home to the world’s first public aquarium. We popularised the name “Aquarium” and pioneered the first environments to provide the correct living conditions for salt-water animals.

The Reptile House was designed by Dr Joan Beauchamp Procter, our first woman curator, and became hailed as one most sophisticated building for animal care and science.

1932 designed by Lubetkin at Tecton

Designed for gorillas by Berthold Lubetkin, the building was home to our first gorillas Mok and Moina.

1934 designed by Tecton. Listed Grade I

Our Lubetkin Penguin pool at London Zoo is iconic. The sweeping spiral ramps kick-started a new era for British architecture, and inspired an enduring love of penguins in the British public.

Following the Second World War the Zoo carried out the repairs that were necessary and in the early 1950's as visitor numbers started to rise, ZSL started to look at a major reconstruction of the Zoo. A plan was developed by Franz Stengelhofen (the Zoo's architect) and later with Hugh Casson and was published in 1958. Following a major fund-raising exercise, it led to the most intensive period of construction in the Zoo's history.

Several of the buildings constructed in this period have been incorporated into more recent enclosures notably The Michael Sobell Pavilions (1972), constructed to house the Zoo's apes and monkeys, now part of Gorilla Kingdom and the Lion Terraces (1975), now part of Land of the Lions. The following buildings remain in their original form

The bridge was built to improve the links between the North and Middle Gardens as part of the Cotton Terraces redevelopment and is formed from precast and post-tensioned concrete. Different aggregates have been used in the concrete components; these are exposed to create a distinctive contrasting coloured finish.

The first major construction arising from the 1958 masterplan. A lower terrace was created alongside the canal with accommodation for the deer and antelope it was to contain. Above this on the upper terrace two new animal buildings were constructed either side of the 1836 Decimus Burton Giraffe House and are designed to be in keeping with it.

The terraces now house part of the 'Africa' exhibit including giraffes in their original building, almost 200 years on.

The Snowdon Aviary made history as Britain’s first walk-through aviary, designed to enclose as much open space as possible, stretching up to 24m tall.

This forceful example of Brutalist architecture houses The Institute of Zoology and is a world-renowned research centre working at the cutting edge of conservation biology, specialising in scientific issues relevant to preserving animal species and their habitats.

The lower levels of the building are constructed in structural concrete and this design continues inside into the public areas of the building. The higher levels are clad in precast panels with a coarse aggregate finish.

Part of the 1958 plan was the Charles Clore Pavilion for Mammals. It is a brick building formed of irregular shaped blocks with a series of indoor, small enclosures. The basement, originally constructed as part of a proposed elephant house, contains 'Night Life' where day and night are reversed by artificial lighting. An area has also been used to create 'Rainforest Life' a walk-through experience with animals and planting illustrating the rainforest environment.

Following the period of intensive construction between 1960 and 1975 there was little new development in the Zoo until the beginning of the new century. A series of redeveloped enclosures were planned which began to see more space being given to individual species. Each new exhibit incorporates design that encourages immersion in the experience and learning and gaining awareness of the conservation work that ZSL carries out across the world.

Opened by Queen Elizabeth I and Prince Philip, we built our Tiny Giants building to be as sustainable as possible.

This lightweight structure and landscaped exhibit was completed in 2007. It gives the gorillas a large open space and natural environment surrounded by a moat on three sides - a significant difference to the 1932 Gorilla House.

Penguin Beach recreates a sand and pebble beach landscape with a colony of Humboldt penguins. The exhibit's 1200 square metre pool is four times bigger and three times deeper than the Zoo's old penguin pool and holds 450,000 litres of water.

The Tiger Territory exhibit is formed by a light steel net that encloses a space of 2,500 sq m, five times greater than the previous tiger enclosure on the Lion Terraces. The enclosure encompasses two significant original buildings; the stork and ostrich

Land of the Lions

The 2,500 square metre exhibit is constructed around the 1975 Lion Terraces and has introduced walkways, some at high level, through all areas of the previous structure to give many different viewpoints of the lions.